Anyone lulled by Khavn’s strikingly accessible Mondomanila is in for a shock. The Filipino film beast punishes his audience here again, just like old times. The form is powerful and avant-gardist and the subject is self-chastising. Incessantly. Khavn’s red period.

This travel-shockumentary-vampire fiction could well be a disguised ode to the Mondo films of Jacopetti, but with Khavn you never really know. Our guide is Kristo Vampiro, who admits in a voice-over that he is willing to go very far to quench his thirst for blood. The entirely blood-red images show the continual self-castigation of people in the street, juxtaposed with cock fights and acted crucifixions, complete with mouth-organ music.
According to Khavn, the film came about during a four-day tour of the Filipino archipelago which he gave an Italian friend. They stopped at the folk-&-roll bar Hobbit House, where all the waiters are dwarfs, and visited the Ringside brothel. They also stopped at several cock fights, which cost the losing gamblers a week’s income, but also made them believe that one good win could save them. Khavn also filmed the cemetery, ‘maybe the only real utopia in Southeast Asia’. 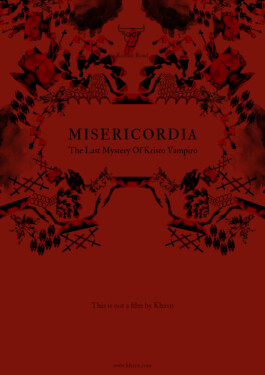