KAMIAS ROAD & Rapid Eye Movies present
MONDOMANILA OR: HOW I FIXED MY HAIR AFTER A RATHER LONG JOURNEY
This is not a film by Khavn
Directed & Produced by KHAVN DE LA CRUZ
Co-Produced by STEPHAN HOLL & ANTOINETTE KÖSTER, ACHINETTE VILLAMOR
Philippines/Germany 2012 – 75 min. – HD – 1:1,85, Colour

“A joyfully outrageous slice of life in the slums set to a punky soundtrack.”  – Electric Sheep

MONDOMANILA OR: HOW I FIXED MY HAIR AFTER A RATHER LONG JOURNEY
MONDO CANE is the legendary and cruel shockumentary by Gualtiero Jacopetti. Khavn sees his own Mondo in Manila. Jacopetti was an outsider; Khavn is a participant. The secret of Khavn is that he shows poverty and injustice in an almost cheerful way, making it even more awkward.
Life in the slums of large Third World cities has been filmed in many different ways, but never before was a musical made about it. Khavn de La Cruz has been involved since 2003 with a unique celebration of the lives of losers in the ghettos of Manila, the Filipino capital. Characters like the teenager Tony D and his depraved friends. There’s Lovely Loanshark, the gambling addict, a slum milker who’s always screaming. Sgt. Pepper is a policeman and (to his great dismay) the father of only daughters and a gay son. There’s Steve Banners, the old white pederast, and Ogo X, the misformed rapper. MONDOMANILA got support from HBF a long time ago and was finally made with mainly private money. The film shows a colourful, occasionally almost glamorous but also violent, rancid and perverse society in the gutter, in flashy, fast-cut scenes, with absurd dialogues and bizarre events. Khavn shakes up film styles to his heart’s content: exuberant video clips, grubby film noir, hyper-realistic documentary and even slapstick – linked by an original story and rousing music.

I didn’t choose to do a ‘faithful’ adaptation of the novel, at least not in the literal sense. I chose to go straight to the heart of ‘Mondomanila’ and make a film that sprung from that. There was already some strong and grotesque imagery in the novel. But in the film, everything is heightened, pushed the farthest it could go. It does not, however, celebrate self-destruction. Far from it. Decadence, after ail, is the language of the privileged.
ln my film MONDOMANILA, I strived to present the truth as gleaned from the cracks ln a celluloid curtain. But the ‘truth’ – it ls not ‘out tnere’ as pundits from the other realm put it. It’s in one’s own backyard – and backyards ceri shock, especially if one doesn’t go out too much. I believe that MONDOMANILA offers one of the most horrifying backyards in the tradition of films made by one of the foremost directors, the late Lino Brocka. If Brocka’s films a decade ago talked about the wounds of Manila, I would like to believe that MONDOMANILA belongs to a new breed of storytelling that makes one feel as if one has actually touched that wound, a close-up view of ail that gangrene and pus.
The complexity of characters portrayed in the film fits perfectly in the rabid world of ‘Mondomanila’, where only those with a strong stomach could survive. Definitely not for the faint of heart, MONDOMANILA shows you a side of the metro that ifs citizens would only too gladly turn a blind eye on. – Khavn 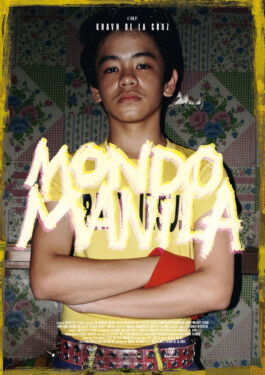