After his mission to kill a Yakuza boss goes terribly wrong, Taiwanese hitman Mr. Long (Chen Chang) is stuck in a secluded Japanese town. With only five days to scramble up the money for his trip back home, he unexpectedly receives help from a little boy named Jun (Junyin Bai) and the oblivious towns folk, who have fallen in love with his culinary talents. With a makeshift food stand built by his new friends, he begins to cook and sell Taiwanese noodle soup in front of the local Buddhist temple.
Disaster befalls the unusual bunch, when a drug dealer tracks Jun’s mother (Yiti Yao) – a former addict – and through her Mr. Long. Yet despite the inescapable confrontation with his violent past, it will be hard for Mr. Long to give up his new life.
A coldhearted contract killer is showered with altruistic love and forced to surrender to it. Japanese director Sabu has mastered the art of merging the normal with the unexpected. Mischievously he sends his protagonists into unknown territory that will broaden their minds and hearts. MR. LONG shows us that one can find happiness in the most unlikely places.
MR.LONG is Sabu’s second Berlinale competition entry after CHASUKE’S JOUNREY (2015) and another cinematic work that displays his finesse when it comes to creating emotional depths by blending different genres.
The alluring and cool Mr. Long is played by renowned Taiwanese actor Chen Chang who received international acclaim for his role in Wong Kar-wai’s 2046 and Ang Lee’s CROUCHING TIGER, HIDDEN DRAGON. 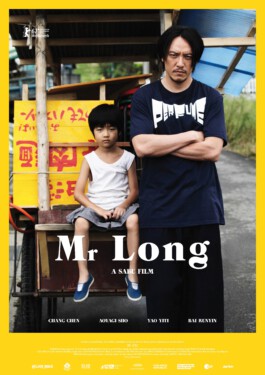